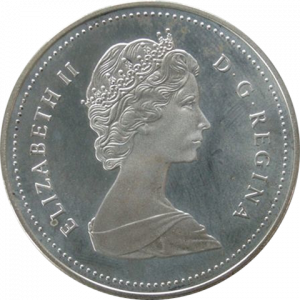 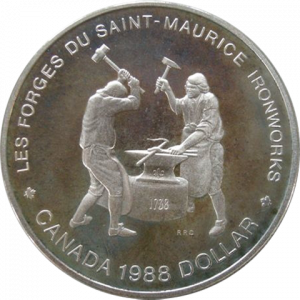 The above collectors’ dollar was issued to commemorate the 250th anniversary of the founding of the Saint-Maurice Ironworks (Les Forges du Saint-Maurice) – which would make it 1738. That isn’t quite true; it was actually begun somewhat before that.

The above is a view of Saint-Maurice seigneury, painted some time after 1750. In the late 1720s, François Poulin de Francheville, the owner of the seigneury near Three Rivers, discovered that it was fairly rich in mineral deposits of various kinds – particularly “bog iron”. Until this time, practically all the raw iron used in New France had to be imported and it was a very definite advantage to have some sort of local iron smelting industry. Perhaps even additionally lucky was the fact the local iron deposits were in the form of “bog iron” since this could be worked with a low level technology.

In 1730 Francheville was granted a 20-year monopoly to mine the iron deposits of Saint-Maurice as requested in the previous year. He was also granted the right to exploit the lands adjacent to his own, uncultivated land simply expropriated and cultivated land requiring reimbursement of the owners.

By 1732, Francheville realized he was short of funds to fully develop the scheme so, benefiting from the favouritism of the colony’s upper administrators, he requested – and was granted – a loan. At the same time, he decided to form a company to process the ore rather just mine it. This became known as Les Forges du Saint-Maurice, the company charter being granted January 16, 1733. (So it looks as if the modern commemorative was issued five years too late). 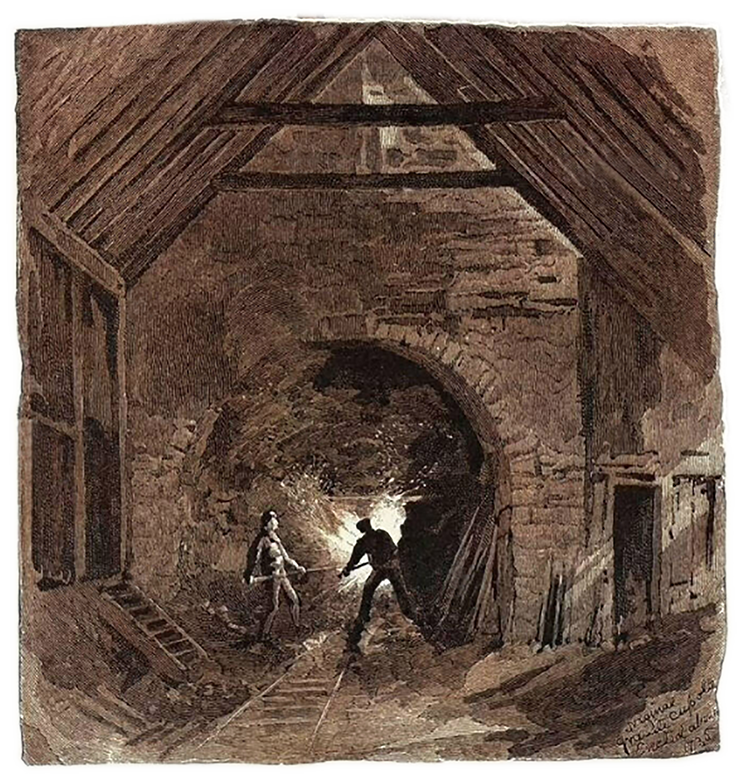 Interior view of Les Forges du Saint-Maurice.
From an engraving probably dating from the late 18th or even early 19th century.

In its essentials, the process used by Les Forges was the same as that used for hundreds – possibly thousands – of years; certainly it was not too different from that of the Norsemen in northern Newfoundland circa 1000 A.D. A mass of iron ore (as pure as possible) was alternated in a stack with charcoal and wood, the whole set alight and assisted by a forced draught of air, new fuel being periodically added. After several hours, much of the iron’s impurities had been burned away or seeped into the ash, leaving behind an incandescent sponge of iron, called “bloom”. While in this state, it was hammered on an anvil which drove out most of the remaining impurities as well as consolidated the metal.

By 1741, “les Forges” was the most important single industry in New France (counting farming, fishing and furs as multiple small ones). At its peak, les Forges employed some 300 men – woodcutters, charcoal burners, miners and smelterers. These last sometimes worked the Forges around the clock on 6-hour shifts.

With the coming of new and better ore discoveries elsewhere, superior production methods and the need for massive investment for upgrade, les Forges’ days were numbered. Perhaps it is a tribute to its constant but doomed struggle that Canada’s first “heavy industry” did not go out of business until 1883 – after 150 years. 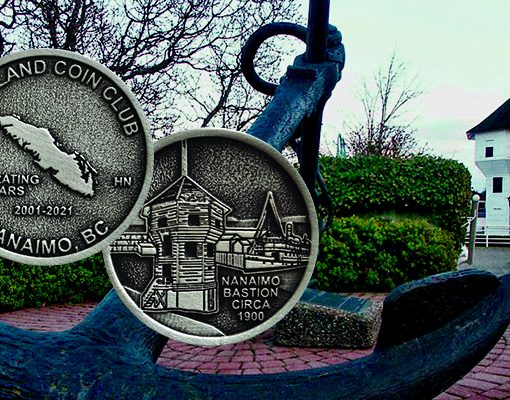 The Mid-Island Coin Club Celebrating 20 years with a Commemorative Medal MICC History It was a December 11, 2001, nineteen individuals gathered […]