Notes of the Mafeking Siege.

It was all a matter of gold and imperialism but by the early 1880s, many of the “Cape Dutch” of South Africa had retreated north in the “Great Trek” to found their own “South African Republic”, leaving the British in possession of the old “Cape Colony”. Then, in 1886, gold – a lot of it – was discovered in the Wittwatersrand and, as could be expected, an immediate boom town of Johannesburg sprang up, with a population of some 80,000 foreigners (or “uitlanders”), outnumbering the native Afrikaaners four-to-one. Even so, President Paul Kruger allowed them no say in civil matters, saw that they paid 95% of the taxes, endowed his friends with monolopies in dynamite and liquor, and charged these outsiders extraordinary freight fees and tolls.

To annex the gold fields of the Transvaal to the British crown and redress the grievances of the uitlanders, Cecil Rhodes, premier of the Cape Province as well as the head of the British South Africa Company, launched an armed attack under the command of his friend Jameson, then administrator of Rhodesia, on December 29, 1895. The “Jameson Raid” was a disaster, he and his forces being captured only four days later. But the fuse was lit and matters went from bad to worse until, on October 9, 1899, Kruger issued an unanswered ultimatum to the British and then declared war. This was to be known as the Boer War in Canada and the first time Dominion troops were involved in a foreign conflict.

Though usually outnumbered (except at the very first), the Boers (literally “farmers”) gave a good account of themselves. Mounted in “kommandos” – a Boer word – they were extremely mobile and forces to be reckoned with since most were crack shots armed with the modern, very accurate, Mauser rifles. A certain amount of secret support from Kaiser Wilhelm of Germany also saw that they possessed a number of modern light artillery pieces.

Within days of war’s outbreak, the Boers crossed the border and laid the towns of Kimberley, Ladysmith and Mafeking under siege. The latter, with a British garrison under Col. Robert Baden-Powell of later Boy Scout fame and about 2,000 inhabitants, was also the rail center for the whole Kimberley-Bulawayo region as well as the administration of the Bechuanaland Protectorate. Altogether, it was besieged from October 12, 1899 until May 17, 1900 and was relieved only when the British brought in division after division of reinforcements. (The first Canadians were of the Royal Canadian Regiment which arrived aboard the Sardinian on 29 Nov., 1899).

In the meantime, Mafeking held out despite the fact that the surrounding forces under General Cronje possessed several modern Creusot guns (called “Long Toms” by the British) whereas the besieged had none – as yet. By a lucky stroke, a hoard of 200 artillery shells was discovered in the town, secreted there by Jameson four years before. At once the army artificers and railway machinists went to work constructing a gun, its barrel a steel water pipe reinforced with steel bands and the breechblocks and other parts fabricated out of steel and brass in the railway repair shops. The gun was named “Wolf” (Baden-Powell’s nickname as well) and is shown on two of the Mafeking notes. 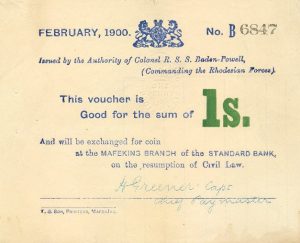 For a few months, money was not a problem since the town contained a local branch of the Standard Bank of South Africa but by January, a scarcity of silver coin was being felt – probably because it was being hoarded – but then army payrolls were ordinarily shipped in from the outside. On 23 January, Col. Baden-Powell ordered the production of paper notes in denominations of 3/, 2/, 1/, 9d, 6d and 3d but only the first three were actually made, presumably because of the work involved. The notes were printed at the local printing establishment of E.C. Ross and all the same with the exception of the large numeral added later in different colours: 1/ = green; 2/ = brown and 3/ = red. A facsimile of the signature of “H. Greener, Capt. / Chief Paymaster” was also added as were the serial numbers by handstamp and the series. All three denominations were issued as Series A – January, 1900 and the 1/ and 2/ as Series B – February, 1900. These low-value notes were printed on just whatever paper was available, including lined scribber sheets, ledger pages and even the blank reverses of railway timetables. As an added security feature, all these notes were to carry the embossed 1d stamp of the Bechuanaland Protectorate but many perfectly genuine notes lack this.

Baden-Powell struck an agreement with the local Standard Bank by which they would be responsible for the redemption and withdrawal of the notes “upon the return of Civil Law”. In the meantime, a cheque was issued to them for the full amount of each issue as it was released. In both series, including all three denominations, a total of £1045.7s.0d was issued, the 1/ by far the most common and the 3/ distinctly rare today; in all, well over 10,000 notes must have been originally issued.

Then the need arose for higher-denomination notes and for them Col. Baden-Powell produced a sketch of soldiers with a Maxim machinegun as well as an artillery piece. His sketch was acid-etched on copper but never reproduced well, even when the plate and paper were sent through a mangel for the added pressure. It was abandoned – but not the design. This was made into a wood-block by the local watchmaker, C. Riesle, and used to print the 10-shilling notes of March, 1900, all the wording being printed later by E.C. Ross. Oddly, an error arose on these notes, the word COMMANDING being mis-spelled COMMANING; it was soon corrected but the error notes are very rare today. Serial numbers were added by hand and notes are hand-signed by both Paymaster H. Greener and R.Urry, manager of the local Standard Bank. The total issue of these notes was £3500 (7000 notes) and the error-free variety the most common of the Mafeking notes. 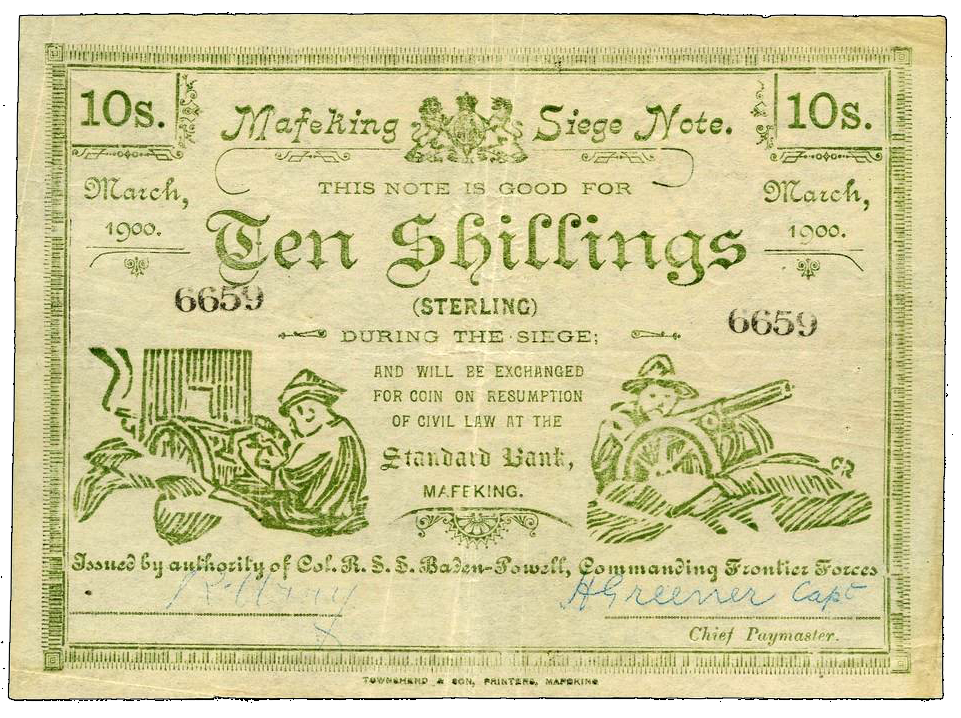 At nearly the same time, One Pound notes were also produced. These were much fancier and, again, used a sketch by Col. Baden-Powell. As well as resolute British defenders, a woman and child are shown in the background and – very prominently – the artillery piece, “Wolf”. This time, the drawing and added printing were mounted in a frame, photographed and glass negatives made, the actual production done by the blueprint process. The serial numbers and both signatures were all added by hand. This time, the best paper available was used and is frequently watermarked with “Charter Vellum” or the Bechuanaland Protectorate seal. Although dated March, 1900, they were actually issued throughout April and May , the production being so slow and painstaking that only about 20 notes per day could be made. 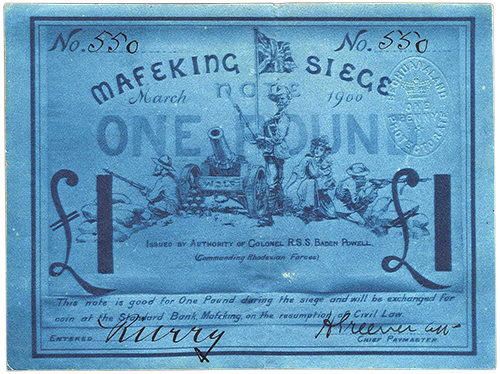 Of these notes, only 683 were issued and even though slightly more common than the 3/ notes or the 10/-errors, command collectors’ values much higher than either of these.

Despite the fact that all these siege notes were intended to be retired and redeemed for regular coin “on the resumption of Civil Law”, this was not immediately done. The Standard Bank had received their total face value of £5228.7s.0d so that this could be done but simply did not call for their withdrawal. The residents of Mafeking were even proud of their notes and continued to circulate them. Finally (in 1907!), the British authorities woke up to this fact and, in looking into this matter, discovered that the Standard Bank had redeemed but 10% of the original issue. They were ordered to complete the process forthwith but, although they complied, they set the date after which the notes would become worthless at September 15, 1910!

Most of the local notes were then turned in since in terms of contemporary wages, they represented an unacceptable loss not to do so. Those we have today were largely the souvenirs of returning British soldiers. Today, even the most common – such as the 1/, 2/ and 10/ “No error” – really aren’t with probably not many more than 50 in existence. There are probably less than twenty 10/ “Errors” and perhaps 25-30 Pound notes. By far, these latter will cost the most, currently valued at several hundred dollars each.

Col. Baden-Powell’s spirited defence of Mafeking (the official history says that he conducted himself with “unaccustomed gaiety”) was noted with his elevation to major-general and later, lieutenant-general. Plus a K.C.B and later G.C.V.O. Drawing on his interest for wilderness training (for which he was nicknamed the original “Wolf”), he founded the Boy Scouts in 1908 and, with his sister Agnes Baden-Powell, the Girl Guides in 1910, the year of his retirement from the military. He was made Lord Baden-Powell in 1922 and Baron Baden-Powell of Gilwell in 1929. 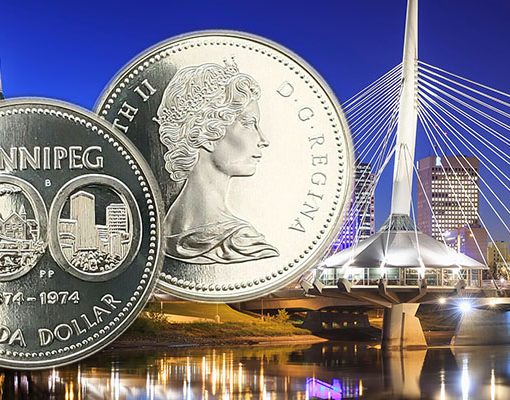